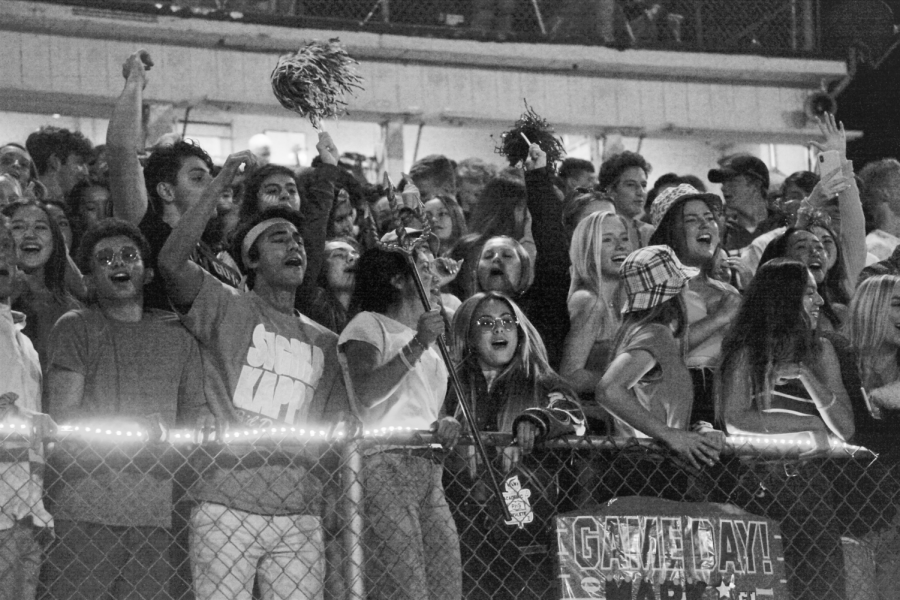 Leading the cheer: The Student Section Suppports the team by chanthing their “I believe” chant at the football game against Mt. Carmel on Oct. 11. Student section leaders Marquez White and Sydney Kallman(Left) lead the Titan cheer to support the football team.

Seniors Marquez White and Sydney Kallman took over the student section and are pumping it up with the will to win. At every sports games, they are the ones leading the Poway crowd in the “I Believe” chant, preparing Titans to take home the gold.
These hardworking Titans were chosen by last year’s section leaders Camdyn O’Donnell and Kellen McGrath.
White was a popular choice for a male section leader because of his popularity among the class of 2020.
“I think I have an influence with a lot of peers in my class. I know a lot of the students and I think they would also be inclined to listen to what I have to say,” White said.
Section leaders try to make it to as many sports games as possible, and even arrive early. However, they do not leave their duties behind at the game.
“I run the Titan Terrors Instagram and advertise for games,” Kallman said.
Kallman, as well as running Titan Terrors, also works collaboratively with ASB to come up with themes for the games.
Due to the popularity of football, some may think that White and Kallman only show up to those games. However, that could not be further from the truth.
“Students tend to like basketball games more than football because they can be in the action of the game,” White said. The section leaders make it to every away and home game, even if they have their own sports to play.
Senior Christian Vierra will sub for one of the section leaders each time he or she cannot make it to a game or are playing in one. “I play basketball, so Sydney will be there with another student that will take over for me during the season,” White said.
Both section leaders have found a love for leading chants.
“My favorite part would definitely be being able to lead the ‘I Believe’ chant at the beginning of every football game,” Kallman said.
“Whenever I get to lead a chant, feeling all the energy from the student section yelling back is always really cool and gives me chills every time; so that’s really fun,” White said.
Students who aspire to become one of the next Student Section Leaders would need great school spirit.
Poway’s section leaders are loud and proud, and are doing a great job at becoming the epitome of school spirit.