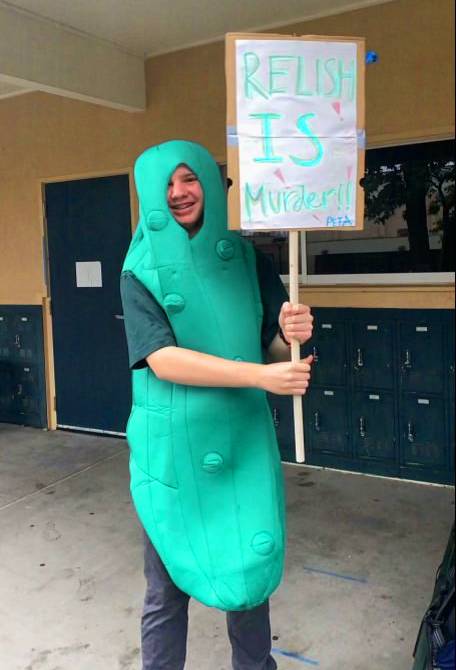 One kid. One history assignment. One sign. One school. Creating history, protests, and a whole ton of laughs.

Click! A student snaps a photo with junior Everett Richards as he walks into school, a new protest sign in hand, this one stating “Abolish Lasagna.” Everyone is excited to see what the new daily protest has to offer, and immediately scans the sign, laughing at the random, lighthearted thing written on it.

Richards, better known as “The Protest Kid” or “Kid with a Sign,” began protesting about different topics ranging from “Wyoming” to “relish,” with no other purpose than to make students smile and giggle. It started with an AP US history video assignment, and all branched from there. “We decided to demonstrate the freedom to protest in a funny way by having me hold a sign that said ‘Ban Among Us,’” Junior Joshua Lokken said. “So I came up with that idea, and then he started carrying it around the school for the rest of the day.”

Richards’s main goal for his daily protests is to put smiles on faces. He just wants people to laugh about the topics he protests about, and not spark any controversy about serious topics people usually protest about, that may make some upset.

Richards gets his ideas for his protests in a variety of ways. “I sometimes take suggestions from people, or just whatever I can think of,” he said. “Sometimes I use random noun generators on Google, and then I just try to make up a phrase with it.”

His protests can range from being very uplifting, to rather perplexing. Some of his protests are not even protests at all, but are more like funny, sarcastic jokes or tricks. He had a sign that said “Happy Friday” on a Thursday, and he Rick-Rolled people by printing out a QR code and pasting it on his sign.

Senior Naomi Raz, Richards’s social media manager (@protest_kid), tries to spread the word about his protests via Instagram stories and posts. “I upload content that I think people will find appealing to the eye, and put snarky, funny captions on posts to keep people on their toes,” Raz said. “With the Instagram stories, I like to make them very engaging for the viewers, like including polls for people to do.”

It is clear just how much of an impact Richards has had on students at Poway High, and he succeeds in spreading positivity throughout the school. His protests make so many Titans laugh, rejoice, and enjoy coming to school with the expectation of seeing “The Protest Kid.” It is exciting for students to come to school with anticipation, and not know what to expect to be on the sign that day.

“His sign is the reason I come to school,” Raz said. “His protests make the school environment much more of a happier place. Although it is such a small thing and the issues aren’t worldwide, it is satire and it makes me, along with many other people, so happy.”

From one history task to daily playful protesting, Richards continues to brighten the school atmosphere, and create signs that make students look forward to coming to school everyday.