Fighting for their Futures 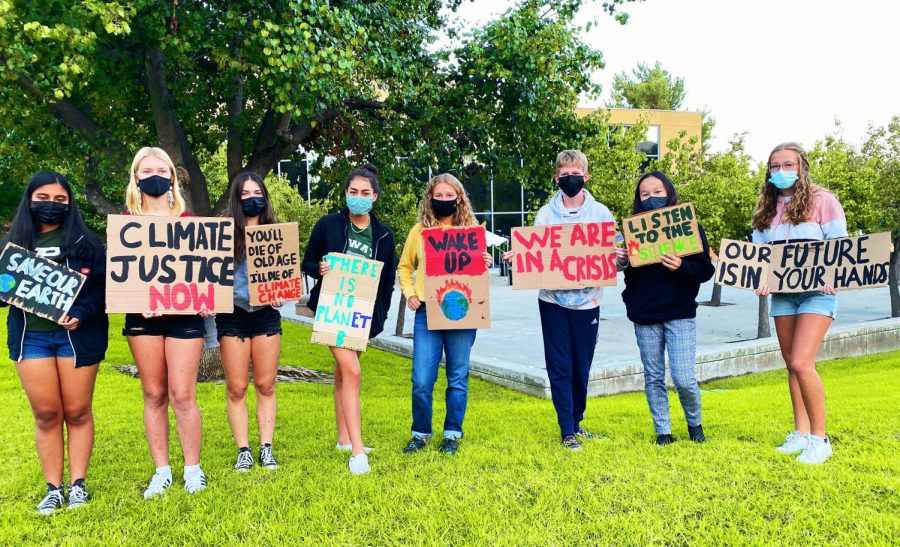 A strong-willed group of Titans participate in the protest, holding signs with statements such as “uproot the system” or “you’ll die of old age, I’ll die of climate change,” in an effort to catch the attention of the people driving by, determined to make a difference at Poway High, in their community, and in our world as a whole.

Every Friday in front of the PCPA, at the intersection of Titan Way and Espola Road, climate change protests occur. A group of around 10 student activists gather from 6:45 a.m. to school start, and they strive to encourage passersby and fellow students to limit their waste and environmental impact, aiming to raise awareness of climate change.

Greta Thunberg, a young Swedish environmental influencer with autism, initiated these protests at schools around the world in 2019, and these Titans are simply continuing the fight against climate change here. The Fridays for Future organization has been taking place at schools in over 125 countries.

Members hope their peers choose to join them, which they can do by arriving anytime before the start of school Fridays. Students can make a homemade sign to hold, or grab one of the premade ones. They hope the protests every Friday will be a beneficial reminder of what is going on in our world today, even if they do not directly see the effect humans impose on our planet.

Freshman Katie Gavigan, the organizer of Fridays for Future at PHS, has been concerned about the issue regarding climate change for a long time, and she believes that the protests are a way for her to do her part in stopping the spread. She wants to prove to world leaders that despite being young, students still have an opinion about what the Earth has been going through, and what it will continue to go through if the rapid rate at which the planet is changing is stopped shortly.

“It’s now or never for our climate; if we don’t do anything about it right now, then we’re literally not going to have a livable climate in 10 to 20 years,” Gavigan said. “Our future depends on what we do today, and I have to do something for my future– I can’t just sit around and hope for the best.”

The student activists hope Titans will take action after witnessing the protests, and do their part to help limit climate change. “We’re hoping they’ll go home and search up why we’re in a climate crisis and how to lower the impact of climate change,” freshman Megan Juza said, “They can easily do this by reducing waste, becoming more eco-friendly, or even going vegan or vegetarian.”

They hope to inspire their peers to join them, and help to end climate change one step at a time.

“Even though little things you do may seem like they won’t count, they add up, so don’t underestimate their importance,” freshman Shani Edelstein said, “It is up to you to save our Earth.”