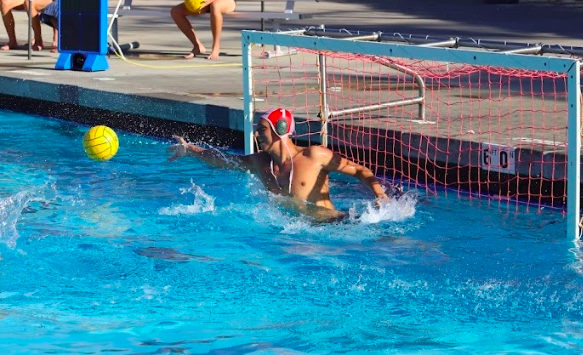 It was Oct. 1. Time was ticking. Players were swimming down the pool in a race against the clock. Three seconds left, and the opposing team, CCA, chucked the ball in hopes of making a goal. Unfortunately for them, goalie Alex Hallak was there to block the ball.

Hallak is the boys’ varsity water polo goalie. His career began when he suffered from a bone marrow disease in his left leg that forced him to quit basketball when he was nine. “ It was impossible for me to keep playing basketball — I couldn’t even run — so, I started playing water polo instead,” Hallak said.

Initially, Hallak played as a defensive player, but soon found his love for playing goalie and has been doing ever since. He has been playing as a goalie for five years. Ever since, water polo has had his heart.

Hallak isn’t just a good goalie, he is one of the best. Last season, he was ranked 4th  in the nation and is waiting for his current season ranking. He was even featured in the San Diego Union-Tribune for his water polo skills.

“ He is the best goalie I’ve ever played with by far. He is unstoppable,” Hallak’s teammate, senior Jesse Gamez said.

One memory, in particular, stands out to Hallak. Last season, Hallak and his team managed to take home the title of CIF champs.

“One thing I love more than anything about water polo is the satisfaction of winning,” Hallak said.

Hallak works extremely hard at practice. With a rigorous and challenging schedule, his whole life revolves around water polo.

“ He works harder than anyone I know. He’s so dedicated to this team, “ teammate Chase Domino said.