Venom 2 crawls and connects with audience 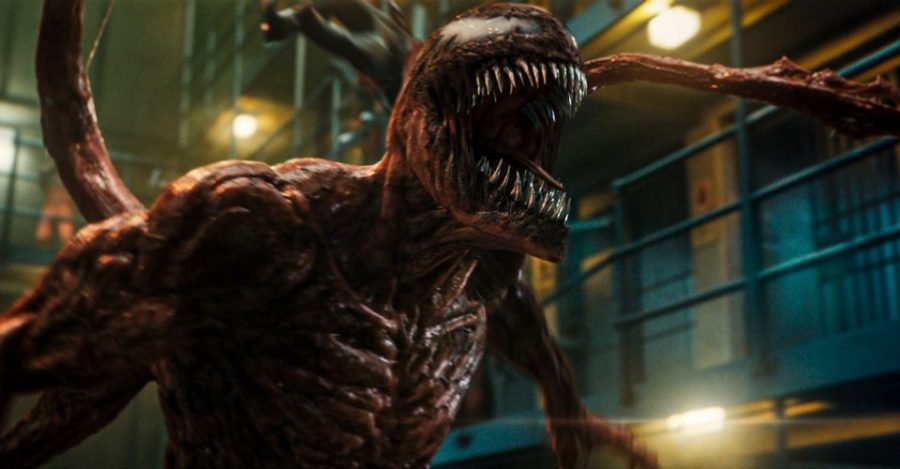 Alien and humans battling with internal battles? Sony has produced its second installment into the Venom series. Venom Let There Be Carnage is the sequel to 2018 Venom. It stars Tom Hardy returning to portray Eddie Brock. The movie focuses on the newfound relationship between Eddie Brock and his symbiote, an alien species named Venom.

It takes place one year after the original movie. The plot focuses on a serial killer, Cleetus Cassidy and his infatuation with Eddie Brock. It tells the story of what happens if a symbiote ends up in the wrong hands.

A symbiote is an alien species that landed on earth and is focused on finding a bond with a human. Each different symbiote has its own personality, so when they take over a host, they connect with the human they are attached to. The first Venom focused on how well Venom connected to Eddie Brock to make an anti-villain kind of team. This shows up in the new film as they focus on a new symbiotic relationship,named Carnage.

The new movie holds up and delivers on the action that many people expected. It however does suffer from the movie’s pacing. The movie is 1 hour and 37 minutes long, which does not sound long, but the movie actually does not fully use its time well. At times, the movie feels rushed and moving at a pace that an average viewer could not keep up with. Sometimes things happen in the movie that do not fully feel completely developed. Such as how fast Carnage and Kleetus connect. It feels like it happens too early in the movie to where the bond doesn’t seem as natural. This does not make the movie unwatchable, it just feels that if they had given it more time, it could have competed for movie of the year.

The movie does have very good moments however. They really capitalize on the Carnage and Cleetus Cassidy relationship. Not only do they focus on that relationship, they also build onto the original relationship established between Eddie Brock and Venom.

One of the things that have the fans raving about it is the post credit scene. Which is a must see if you go to the theaters. Overall the movie delivers on an action packed comedy as it promised.