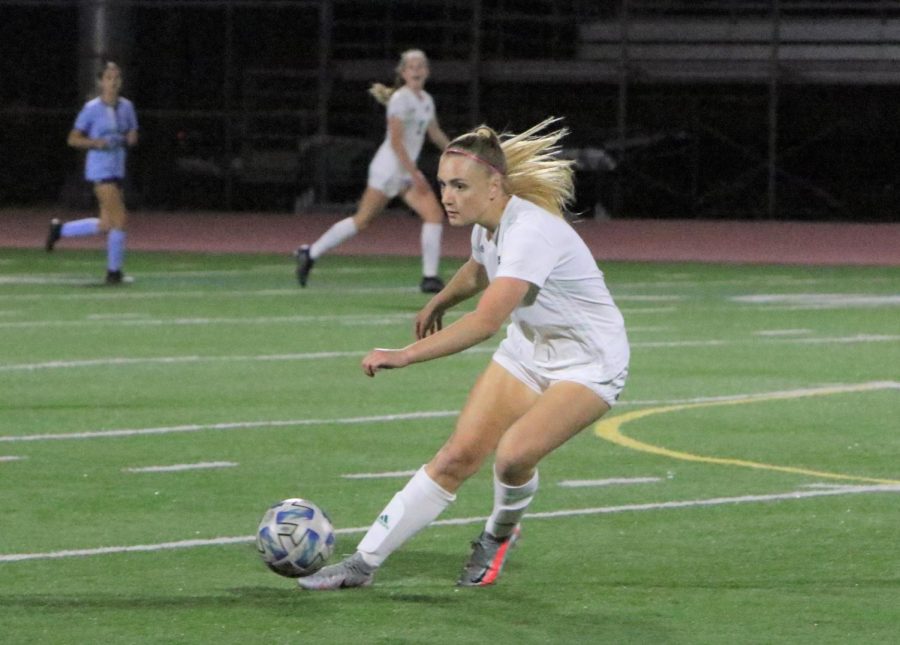 She puts in a tackle, wins the ball and shoots… and she scores! Coming into the first years of high school is not always the easiest. However, that did not stop sophomore Megan Sgalio. Sgalio played varsity soccer her freshman year where she faced many challenges, such as collisions between practices for both club and highschool, as well as injuries, but this did not put a dent in her soccer career.

Waiting to find out what team you made is almost as intimidating as the actual try out. With all the hard work Sgalio put in, she was rewarded with making varsity as a freshman.

“It was a relief to know my hard work paid off!” Sgalio said.

Sgalio was fearful to be playing against and with upperclassmen, but the team was very welcoming, and made her feel at home.

One of Sgalio’s favorite memories with the team last year was going to get food after the games. “Our favorite place to go was always Chick-Fil-A, it was just a good way to debrief and celebrate,” Sgalio said.

Sophomore, Tessa Buswell, played varsity last year as a freshman with Sgalio. Buswell loves having Sgalio as a teammate and as a friend.

“She made practice much more enjoyable,” Buswell expresses. Sgalio has an extremely enlightening personality, and makes any environment exciting.

Buswell’s favorite memory with Sgalio was in the CIF quarterfinals, “I got the assist to her goal to tie the game up,” Buswell explains.

Being two of the youngest players on the team could be difficult because as you are playing against 16 to 18-year-olds as a 14/15 year old, you really have to be brave and be willing to take chances.

One of Megan’s biggest supporters was varsity coach Aaron Jaffe.

“Megan was a fun player to coach last season. She always worked hard and was relentless on the field,” Jaffe said.

With someone as driven as Sgalio, she stood out instantly to everyone around her.

“The first thing that stood out to the coaching staff was her tenacity in front of the goal. We were in a position where we needed a forward, and she did a good job of that for us as the season went on,” Jaffe said.

Sgalio always knows how to brighten up a room and put a smile on people’s faces with her bubbly personality. “Megan was always someone I enjoyed talking to at practice because she was always so motivated and driven to be the best version of herself she could be,” Jaffe said.

Sgalio has had a huge impact on many people’s lives, both inside and outside of soccer. Make sure to look out for her in the field this year.