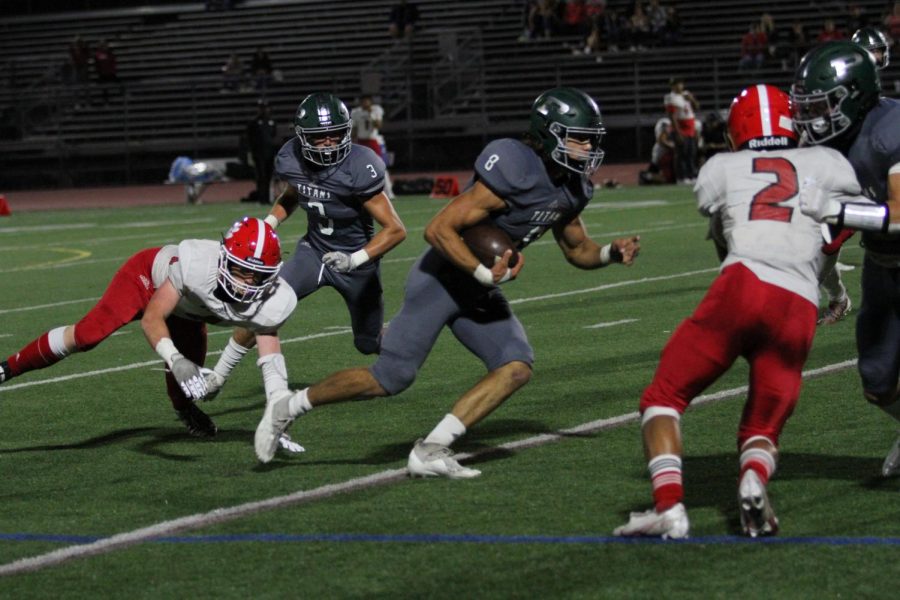 Fall Friday night lights are back just like they never left. With the last season being hindered by the virus, this year it is raising everybody’s hopes. There are no more small practices, fans are back in the stands, and players are ready to play.

“ The only thing affecting us is the mask we have to wear,”  varsity player Wences Juarez said.

The Titans had their first home game Friday, Aug. 27 against Eastlake. The team was able to take home the win by scoring two back-to-back touchdowns in the fourth quarter to end the game with a score of 21-7.

Poway had an away game Sept. 3 against Ramona High. Varsity started off hot with two straight touchdowns in the first quarter, and then continued to score while locking Ramona up on defense. Poway took home the 28-14 win.

Varsity went head to head against Torrey Pines Sept. 9. The Falcons outscored Poway three out of four quarters and took an upsetting 26-6 victory.

In their homecoming game against Vista High School Sept. 17, fans and players crowded the stadium and cheered as they watched the two teams battle all night. Varsity started off strong and kept it going, taking home the win by blowing out Vista 55-14. The energy that the crowd brought fueled the team to play hard all night.

Although Varsity took two upsetting losses, they have been pushing their limits and working hard.

After coming up short in their first few games, varsity is working towards starting games off hot and fast instead of slower like in previous games.

Although it is only the beginning of the year the team has trust in each other and the coaches which they believe is a good foundation for a winning season.