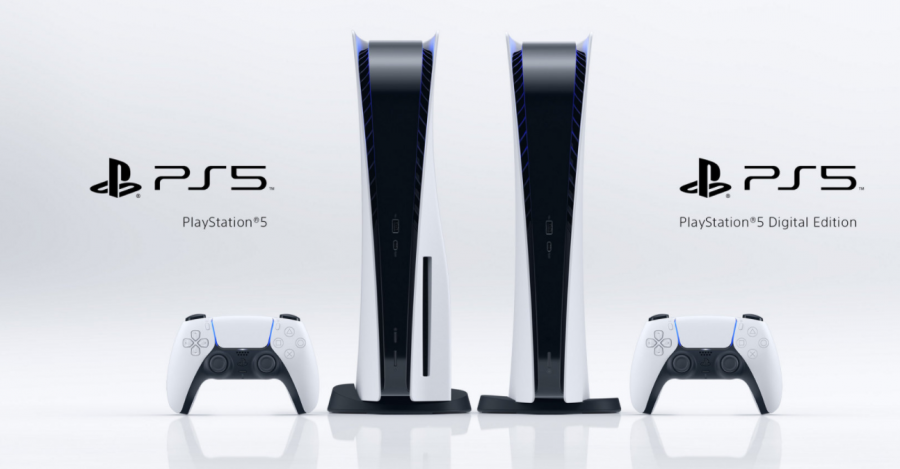 The new PS5 is complete with a futuristic design and new color scheme.

With new video game technologies creates a demand for better hardware to run these games. That has been the main focus on the upcoming new Sony PlayStation 5. The console will be available Nov. 12 and has sent shock waves in the games industry.

The PS5’s hardware specifications are certainly nothing to scoff at. The NVMe SSD makes load times better by an order of magnitude compared to Hard Drives of consoles past. Along with an AMD 8-Core CPU, this creates a console that could easily play more demanding titles such as the upcoming Cyberpunk 2077.

Although with these great features comes worries from fans, “The hardware is decent, but it will be more expensive, and that might be a turn off for some people,” junior Kyle Hauschild said.

The cost will definitely be up there: $499.99  with the disc drive and $399.99 without . As price goes up for more demanding hardware this may lead to many gamers leaving consoles for PC gaming. To many people PC gaming is a better choice overall. More can be done on a PC besides gaming which gives it an edge.

“I built a good $700 gaming PC over quarantine and don’t think I’ll ever go back. Having a PC is a lot better than having a console,” senior Connor Fitzgerald said.

Another criticism of not only the PlayStation but the Xbox are the consoles’ physical appearance. As it is most likely going to be in someone’s living room they want something that looks nice.

The advancement of the PS5 is a major stride for the gaming industry and many people are happy to see certain technology is not cutting-edge. While some preorder the console out of the gate others reconsider their purchase.