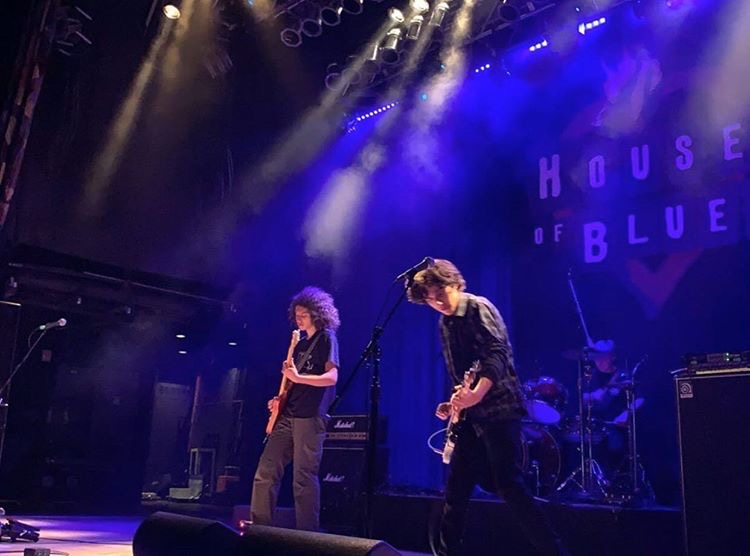 Many students at Poway dream to one day become a national popstar. The band The Knockdowns are already living many teens dreams by bringing their own flare to San Diego tunes. The members are, Gavin Jones, a sophomore at Poway High, Jude Wallace, a sophomore at Mount Carmel High, and Charlie Kroepel, an eighth-grader at Bernardo Heights Middle School.
Gavin Jones is currently the lead guitarist of the band. “We have plenty of original songs. My personal favorite and probably most popular song of ours is called ‘The Eagle Had Landed’, ‘’ Jones said. They share their music through playing at concerts and streaming their rock music. “The band started when our drummer, Charlie Kroepel, needed a bass player for another band, but I proposed that we instead get together and jam,” Jones said.
Jude Wallace is the band’s bass player. “The craziest show we’ve ever done was at the Rock N Roll San Diego. By far our best show yet. Plus it was cool making friends with people who were in the crowd,” Wallace said.
Charlie Kroepel is the drummer of the band. “The best part about being in a band is the whole music community of San Diego. It exposes you to a whole underground scene, and a new group of friends that you can rely on and see at shows on the weekend,” Kroepel said.
You can listen to their three song demo on all major music streaming sites including, Spotify, Pandora, and Apple Music under the name “El Atomico”. For only having been together for two years they have already played at venues and events including the Rock N Roll San Diego Concert, Jingle Bell Rock Out Event and at House of Blues San Diego. They are currently setting up more shows all over San Diego.