In the season opener against Crawford, Poway shutout the home team for a 1-0 victory on Dec. 3.

“We were more physical and better fit than the other team,” head coach Eugene Morris said. “We wore them down and scored late to win the game.”

Since then, the Poway Titans soccer squad defeated Preuss UCSD in their home opener Dec. 5 (3-0) and University City in the semifinals of the Francis Parker Tournament on Dec. 9 (3-1).

However, Poway lost the Francis Parker Tournament on Dec. 11 to Cathedral Catholic (3-2) in the first overtime game of the season.

Last season, the team made it to the second round of the CIF tournament after winning the league championship. Nonetheless, the team has improved a lot and are hungry to make it farther this time around.

“We are a much faster team than last year and we have a stronger bench,” head coach Eugene Morris said.

With three consecutive league championships, the goal is clear for the strong boys’ soccer squad — win the league and state championships. “We’ll have to take it game by game and come ready to play every week,” senior captain Joe Salamy stated.

“The feeling of satisfaction of getting those clean runs or dribbles and then distributing the ball is hard to beat,” senior Jaysom Galindo said.

“I love the team aspect of soccer, how a team has to have good chemistry on and off the field to really have success,” Salamy said.

Their next home game will be played on Jan. 6 against San Diego with leagues games beginning Jan. 15 against Mt. Carmel. 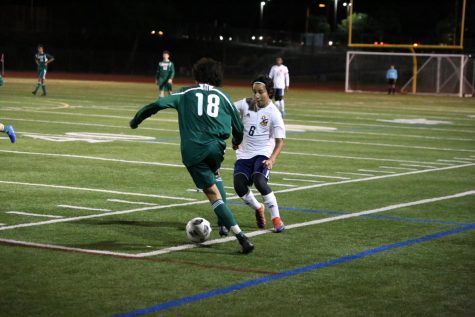